The value of a college degree is well-documented, but new research from Goldman Sachs appears to further fuel the college-value debate. The findings estimate that today’s college graduates, on average, don’t “break even” on the costs of a bachelor’s degree until age 31 – a full year longer than it took the Class of 2010. To Goldman researchers this represents a worsening trend – if sustained, in 15 years the average graduate won’t break even until age 33, and the Class of 2050 won’t recoup their costs until age 37.

Although wages are up for college grads, the researchers asserted that those income gains have been offset by increases in college costs (e.g. average net tuition and living expenses) – and that graduates of colleges ranking in the bottom 25% fare the worst, on average.

Earning a college degree is in no way a guarantee of career success, but skeptics should be careful to not discourage students from going to college. This is especially true for low-income students, who already appear more likely to be discouraged from attending college due to perceived costs.

In fact, workers with a college degree are significantly less likely to be unemployed and underemployed; and on average, they earn vastly more than their high-school-educated counterparts. What’s more, a report similar to Goldman’s by the Federal Reserve Bank of New York found that it takes roughly half as long to recoup the costs of a bachelor’s degree today as it did in the 1970s: 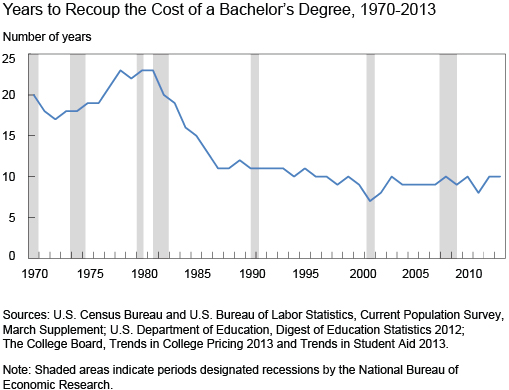 This suggests that even if the average ROI of college has declined in the past several years, college is worth much more for the current generation than it was for Baby Boomers and early Gen Xers.

The Cost of Not Going to College

As states continue to divest in public higher education, it’s expected that the average student’s college ROI would decline. That is, as students pay a greater share of total college costs in the form of tuition, their average individual returns would diminish.

But this detracts from the more important issue – that even if college’s ROI is in decline, it’s very likely that the cost of not going to college today is greater than it’s ever been as detailed in this report from Pew Research Center.

College is Worth It

Key Takeaways from ‘Preparing for FAFSA Simplification on Your Campus’ Webinar

Is College Worth It? A New White Paper Has The Answer

RNL Research: Student Loan Fears And How to Overcome Them