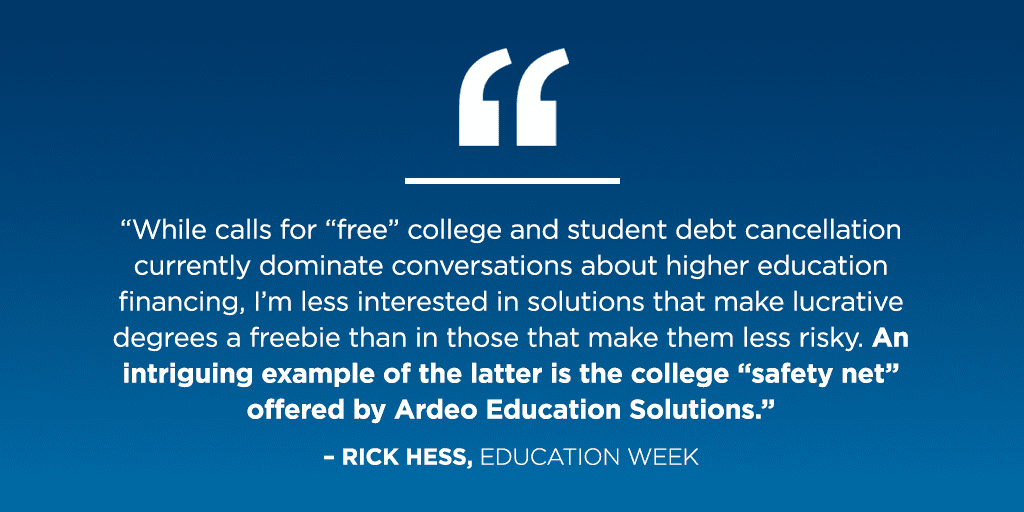 Can college-going be less risky without being ‘free’? asks an Education Week article published in August.

All it takes are two things:

How can innovative colleges and universities use a powerful promise to make college-going less risky?

Our story starts in the 1990s with a young man dreaming of attending Yale Law School.

Like many students then and now, Peter Samuelson was concerned about taking out student loans.

Peter grew up as a missionary kid in South Africa. After watching the movie Cry Freedom – which is set in the late 1970s apartheid era – Peter became inspired to work in human rights.

He knew his aspiration would make money tight after graduation. How could he attend his dream school and work for a nonprofit without being buried in student loans? It seemed hopeless.

Just as Peter was about to enroll at another institution, Yale made him a powerful promise that changed his life. The promise was so impactful it later inspired him to found Ardeo, so he could help other colleges and universities make the same life-changing guarantee to their students:

LRAPs are a powerful promise. They give students the confidence they need to invest in their dreams. LRAPs enable students to attend their preferred college and pursue their passions. In turn, they help colleges and universities improve access and enroll more students who would not have attended otherwise – like Peter – by removing the fear of student loans.

Read more about Ardeo and how its LRAPs make college-going less risky in the Education Week article by Rick Hess, Senior Fellow and Director at American Enterprise Institute, a public policy think tank.

About Ardeo, College is Worth It

The Higher Ed Marketer Podcast: Why You Need An LRAP